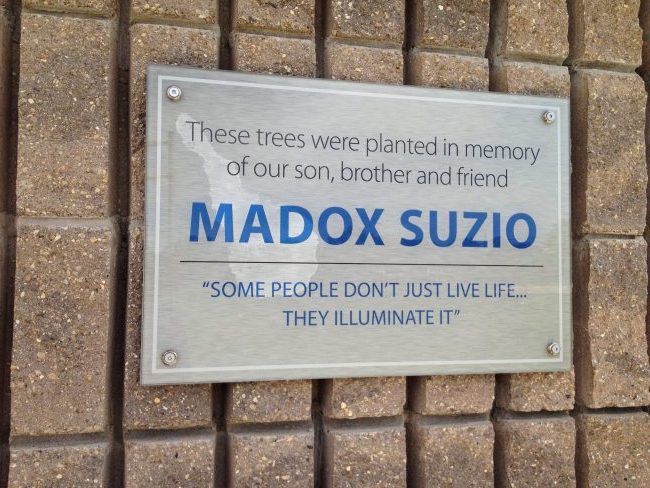 The end of the year marks many students graduating. The end of the old; with the start of something new. A time of relief, glee, and celebration. The start of freedom from the routine of making lunches, early wake ups, and bus rides. Beaches, bike rides and travelling. Regardless of who is graduating from what, each person leaves knowing someone is proud of them and their accomplishments. Even those little kindergarteners know, by looking at mom and dad’s faces and having to smile for ALL those photos. Graduation is a time for happiness.

I was having a hard time sitting down to type about this.  I wanted to be filled with glee, and taking too many photos of Madox walking across the stage. I wanted to laugh and shake my head at Madox and his buddies acting like total goofs posing in front of the beach theme backdrop. I wanted to watch the video montage with eyes filled with tears, because my youngest child is growing up too fast. I wanted all of that. Yet….

Marco and I were invited by the principal of Ecole St. Germain to the grade 5 graduation ceremony. As we spoke on the phone, she asked me if they can have a minute of silence in honour of Madox during the ceremony. I was caught by surprise and began to sob “oh, of course.” Madox should have graduated with all his friends from grade 5, going to a new school for grade 6. The same kids he has known since kindergarten. The kids I knew all by name, had over countless times, and would bake cookies for every holiday. I was so touched the school still wanted to include Madox in the ceremony, as deep down inside we always fear he will be forgotten. After we got off the phone, I sobbed for a very long time in my office. This shouldn’t be about Madox being remembered. He should be part of his own graduation. He didn’t even get to start grade 4, barely finishing grade 3. It was hard to hold my emotions in and left my door shut for most of the morning.

I was unsure if I was going to be able to go to the ceremony, but Marco said he would go for sure. My heart was too heavy at the thought of going back into that school for a day Madox would have loved. I decided that morning I would go and met Marco at the back of the school where the school planted trees for Madox and our family. As I waited for Marco, I walked slowly around each tree, remembering the day we released balloons for Madox with his classmates. I remember it like it was yesterday. Then I walked over to the plaque with his name and touched it softly, thinking about how the quote I picked out called to me. Describing Madox so well. I got a little sad seeing that water got behind the face of it and left a watermark. I began wiping it with a tissue I had, feeling tears start up. Why was I so upset about this watermark? I wanted the plaque to be clean, his name to stay present to all that walk by. I gave up when I realized it was between the two pieces and walked away in defeat.

Once Marco arrived, we walked in, head down, right to the back of the room. So many happy parents, full of glee and pride. The gym was decorated by parents, and one of them was not me. I always ensured I was part of committees to bake, decorate, plan…. but not that day. I wasn’t a parent of a graduating student. That thought got my tears flowing and I was hoping the graduation would begin. Boy was I wrong! As soon as the students started to walk in, my heart felt like it was going to explode. One by one I would recognize each students and see how much they have changed in two years. Two short, yet so very long years. Some kids changed so much, while others looked exactly the same. Some grew so tall, just like I know Madox would have. Naturally the tears began to flow in disappointment and wonder. What would Madox look like today? Would he look the same? More mature? How would he style his hair? How tall would he be? Would he still be that kid who searched for us in the crowd just to smile and wave at us? Oh how I missed watching for him to finally find us and happily wave. There was no pride or celebration for us that day. Only sadness, and yearning. 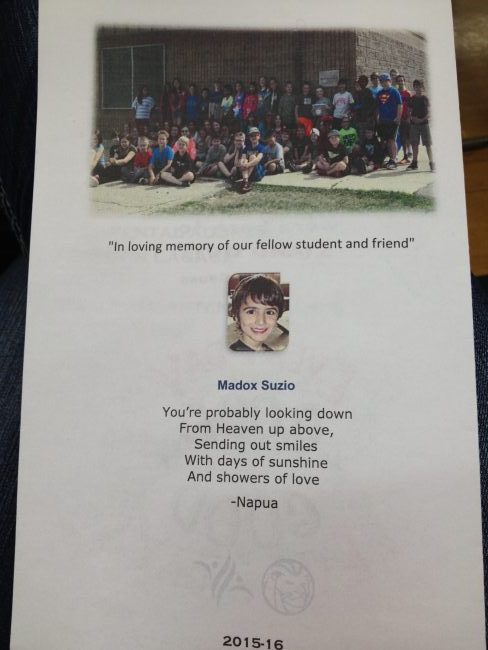 The back of the program. Top is of all the graduating kids, with one student holding a photo of Madox

The video montage consisted of every student’s parents submitting three photos: birth, kindergarten and present. When we were asked to submit photos of Madox months ago, I got really sad when it was time to pick the present. Present to us is 2014 and even then, he was too ill and the steroids made him puffy. So I had to submit a photo from late 2013, which only made me hurt more. I was in a very dark, lonely place for the week leading up to the ceremony. It was very hard for me as it just reminded me full force of what was stolen from us. Not that we ever need reminding. I sobbed in the back of the gym during each photo of each student. Seeing how happy they are, listening to them all scream out names of each student as they try to guess who the baby picture was. When it got to the baby photo of Madox, everyone was screaming different names. As soon as it flashed his age 5 photo, all the kids got quiet and a few quietly said Madox’s name. By the time it flashed his “present” photo, all the students were silent. Oh that hurt my heart so much. I was hoping they would all yell his name out like they did other photos, but it was the complete opposite. Why? Why didn’t they yell out his name? Were they sad he was included? Were they sad he wasn’t there? Did seeing his photo make them uncomfortable? Oh I hope that isn’t the case. I want his classmates to remember him for the life he exuded. His laughter, his happiness, his friendship. After the photos, each child was called on stage to retrieve their certificate. Child after child; photo after photo; smile after smile. I couldn’t get out of there faster! As soon as the principal said thank you, I was out the door. I wanted to scream. I wanted to punch something. I wanted to cry, but Marco grabbed me and reminded me we needed to thank the principal for what she has done in honour for Madox. I’m glad he did, because I would have felt so much guilt leaving without thanking her.

Marco and I were very quiet once we got home. Reflecting on our broken self. Wishing it was different, wishing it wasn’t real. He sat down and tried to work, while I sat on the couch trying to read. I absorbed nothing, only thinking of Madox. Once Valin came home, I wiped my face, smiled at my boy and started to make dinner. This is our life now. Pushing our feelings deep down just so we can manage to get through another day without our whole self. Fighting to remember why we have to keep going. Always remembering Madox. ALWAYS.