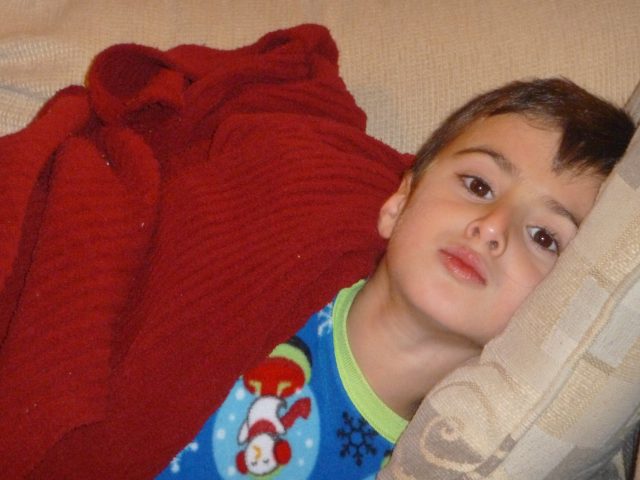 Madox had a terrible night. He woke up at 12:30am and didn’t ever get back to sleep. It started off with lots of pain, then a very gurgled chest. I kept suctioning him but it was just too deep in his throat and chest. He was getting so uncomfortable…….

By 5 am I had called the doctor to come. I needed Madox’s secretions and pain controlled and the atropine hourly wasn’t working. The doctor was over by 630 and ordered a bunch of subcut meds and ran out to get them for us. Marco went upstairs and woke up Valin to tell him what was happening. When Marco came down alone, I went up to see Valin. He was sitting on his bed crying. I gave him a big hug as we both cried. He was sobbing so hard. All I could say was ‘sorry for not being able to stop the tumour’…..

It was so hard for all of us to watch Madox struggle to breathe. Valin just sat beside Madox with tears streaming down his cheeks. There was so much secretions, he sounded like he was drowning. My poor sweet boy…..

By noon I had a handle on his secretions and he wasn’t as wet sounding. Before that, I was getting angry at the doctor and nurse because nothing was helping Madox quick enough. We had Madox sitting upright with us on each side of him and propped up on a bunch of pillows. The hospital bed arrived so Marco and I transferred Madox over so his body can fully rest back while we can elevate his head. He didn’t wake up when we transferred him…..

Everyone who came to same their goodbyes to Madox finally left and Madox mumbled “where’s Valin?” (It is so difficult to understand Madox  because he is unable to move his lips and was very weak). Valin was still at his friends because we sent him there so he didn’t have to watch Madox suffer. We called Valin back and he literally ran home because he wanted to be with Madox. When we told him Madox was asking for him, he sat beside Madox on the bed. Madox opened his eyes, looked at Valin and said clearly but slowly “you can have all my stuff” and with our help, sat up and gave Valin a strong long hug. The strongest hug we have seen in days. We all started crying and Valin sobbed loudly as he hugged Madox, not wanting to let go. Madox laid back down looking very tired….

At one point I said to Madox softly that he doesn’t have to fight anymore.. Valin got upset and screamed “NOOOOOO. DON’T LEAVE!” Hearing the sorrow in his plea was heart wrenching and that will never leave me. Never! We tried to explain to Valin that Madox has suffered for 5 months and it is not fair to ask him to fight anymore. Valin said he knows, he just wants to be with Madox longer. “I want to run around and play with him one more day”…..

It is 7 pm and we are all sitting around Madox. Valin asked to sleep on the floor tonight because he wants to hold Madox’s hand if he passes away tonight. He even said he will do a shift because we don’t want Madox to pass as we all sleep. Aww Valin is an amazing big brother, but no child should worry about his brother dying alone…..

If people think one can forget and get over your child dying, they are completely ignorant and naive. After reading part of one day in our life as Madox was dying, can you EVER forget these memories? To me it is still fresh in my mind like it was yesterday. The ache in my chest is still strong as if my heart was just torn out for the first time. I kept a journal so I will never forget details and to remember the suffering Madox went through. It is to continually remind me why I am fighting for a cure. I now know I will never forget these specific memories, as it is burnt deep into my soul.