Halloween takes on a different meaning once you bury a child. The excitement isn’t all there, no matter how hard you try. You will still smile and laugh at the kids that trick or treat at your door, but there is still sadness and longing in the back of your mind. This is the fourth halloween without Madox. Some may think four years is a long time, but it still feels like yesterday. Unless you have said goodbye to your child, you will never understand how time stands still. Probably because as parents, we want to hold on to those precious moments, wishing for more.

Our new tradition is to carve our pumpkins, as always, but one of us now carve a fourth for Madox. We then go to his plot to “visit” and leave the pumpkin there. This year was my turn to carve for Madox, as Marco carved a pokemon for Madox last year. Marco felt Madox would still be into pokemon and Valin didn’t have an opinion. He has been having less opinions lately about “what would Madox like?” 🙁  Guess it is hard to know what his brother would be into since his own tastes have changed so much. I sat online looking at ideas when Marco pointed to an owl. Madox’s last painting he completed while he was ill was an owl. He worked so hard on it. Having double and blurry vision, he was slow at painting but ensuring he did his best job. He progressed and deteriorated so quickly that he was unable to fully complete the owl. All of a sudden, he was very upset one day as he remembered he still had to paint the owls feet to finish his work. As he could barely move, sight worsening and difficulty sitting up, he managed to draw the feet but only able to paint one foot. He cried and cried after he was done because he didn’t like how it looked. That memory breaks my heart remembering how defeated he must have felt. Having the last thing he had left stolen away from him.

After looking at the stencil, I knew instantly I needed to carve it. Valin really got into his carving this year and did a fantastic job. We had a good time together carving away, but we felt the sadness amongst us all. Missing that one other body. This year Valin and Marco had to be at soccer practice so I went alone to Madox’s plot. I went in the late evening so it was pitch dark but I managed to light the owl for Madox and kneel at his headstone for a short while. I was extra sad Marco and Valin couldn’t be there with me but I am happy we managed to get the pumpkin out to him again. As I sit here typing, children are yelling ‘trick or treat’ at my door, Marco is “ahhh’ing” at some kids cute costumes,  and Valin is out having fun with friends. This new way of living is so hard on our hearts. I am just thankful we all are able to continue to live, even though our hearts are broken. Sometimes it feels like life stands still, but we plow forward enjoying the small things in life. 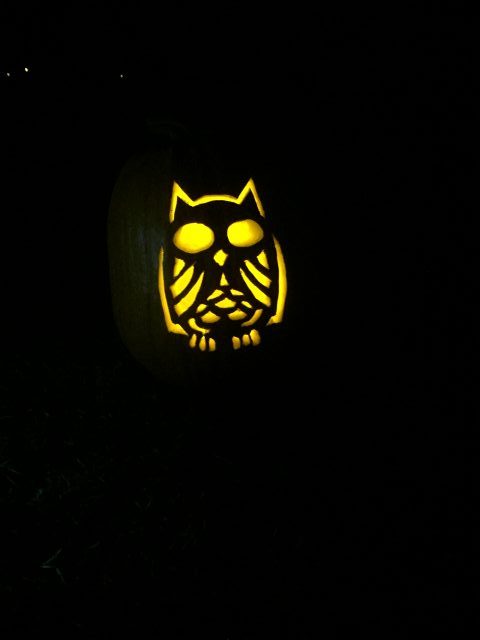