We recently returned from a trip to Maui, Hawaii. A trip I have wanted to take for many years. A trip I wanted to take both my boys to enjoy with. The very first time I mentioned a trip to Hawaii was when the boys were young. Valin and Madox thought I was crazy to want to swim in the ocean. “The ocean mom? Don’t you know it has sharks?” Clearly they’ve watched shark week too many times.

It was a wonderful trip, a trip of a lifetime for sure. There were moments that I would feel sadness and longing for Madox, especially watching Valin in the water without his sidekick right by his side. I miss that laughter between them. At times we could see that longing from Valin as well. Most of the time we were able to really enjoy ourselves with each other. Long walks, hikes, snorkelling, and just being with each other. So many laughs that we all needed.

The hardest emotional break I have had in a while was while we drove up a dormant volcano called Haleakala. It’s peak is over 10,000 feet above sea level. I am afraid of heights but didn’t ever have a break down due to it. Marco drove slowly and carefully up the volcano, but I began to have palpitations and becoming overly anxious. Not my norm. I tried to hide it from Marco and Valin so I tried to contain it. As those feelings came slamming into me, random visions of Madox’s battle and struggles began flashing through my mind. Every horrible vision I had were during the times we were most fearful of losing Madox. Being told he has cancer….. walking into his hospital room crying and telling him cancer…standing at the foot of his ICU bed looking at the tube breathing for him…trying to carry him to the toilet and he not able to hold his own head up…he gasping for breath, fighting as hard as his little body could.  It was beginning to be too much.

At 7000 feet, I asked to stop at the information booth to go to the bathroom. I ran out, stood in the stall and cried and cried. I was shaking so much I couldn’t stop it. Every fear I ever had with Madox came to the surface ten fold. I didn’t realize such a small fear of heights could elicit old suppressed fears. I took deep breaths to calm myself, dried my eyes and walked back to the car. I made Valin sit in the passenger seat while I sat in the back. I just concentrated on my deep breathing and looked at the back of the seat in front of me. Once we got to the top, the trembling stopped and I was able to get out and enjoy our time. We even hiked up a little higher to enjoy the view of the crater.

That evening I still felt the tugging at my heart, missing Madox so much. Although we all had a wonderful time, we still had times of sadness. This trip should have been all four of us enjoying the food, sights, and sunset swims. Now we have the ‘what should be’ moments with hard memories we try to push down. 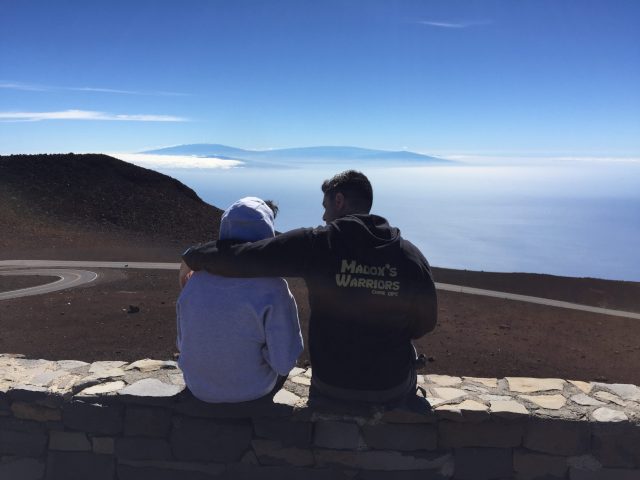 Stolen moment above the clouds between dad and son