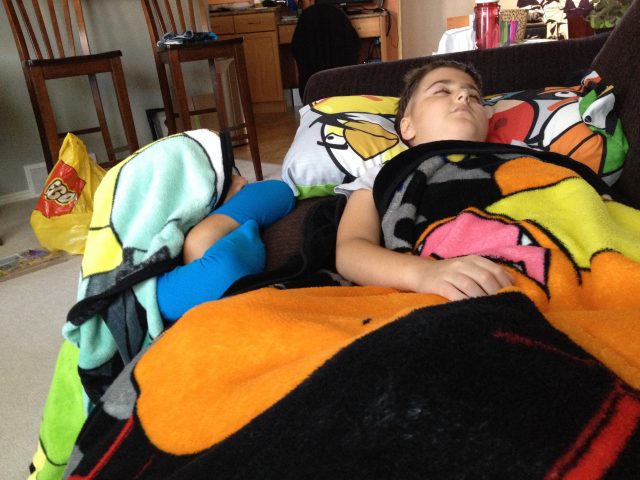 Madox did not sleep well overnight. I massaged almost every body part because he ached all over. Even his cheeks and temples hurt because he is so puffy and the skin is so taut. I took him downstairs and he started having a panic attack. Gawd the stress he must be feeling. My poor sweet boy 🙁  It’s scary watching him, I can’t imagine how terrifying it is for him living through this. He got more upset when he asked to eat and I had to explain it was too unsafe for him to eat and that is why the tube is in his nose (NG tube was inserted the night before). I am sure his memory is failing him due to where the tumour is pressing, and he’s not understanding why he can’t eat. He is sounding so raspy now, I am afraid all the fluids and food are in his lungs. I gave him a feed through the tube, but he wasn’t satisfied. I wouldn’t be either. I folded and gave him some oatmeal, knowing he is just going to aspirate it. But he is dying! How can I refuse him something he wants so badly only to upset him? It was a lose-lose situation. He did okay with the oatmeal, eating slowly and eating half the bowl.

His uncle Sammy from Calgary came by to have one last visit before he flies back out in the afternoon. He had flown in every 2-3 weeks after Madox was diagnosed, spending as much time with him as possible. Today I pulled him aside and encouraged him to say his last goodbyes because I knew Madox wouldn’t survive the rest of the week. When he gave Madox a hug goodbye Madox said he loved him which was heart wrenching. Madox rarely told other family members that he loved them first, only that he loved them too after they said it. Then Madox said “see you in September” because Sammy told Madox before that he will be back in a few weeks. Uncle Sammy looked so heartbroken and said “yes, see you in September Madox,” and left Madox for the last time.

Madox has become more and more difficult to understand. His voice is very quiet and soft, and at times he mumbles because his lips and mouth aren’t moving as they should with all the weakness caused by the tumour. We have had to ask him a few times to repeat himself and you can see the frustration on him. I feel terrible but I want to understand what he needs so we can help him.

The palliative care nurse dropped off a suction machine for me last night and I had to use it a few time today. I was just getting some secretions out of his mouth and I didn’t have to go deep, thank goodness. Madox was okay with the suctioning and would ask if I can take some “spit” out of his mouth. He is clearly starting to have difficulty controlling his own saliva.   At one point I hit his uvula with the suction and Madox didn’t even gag. 🙁  My stomach dropped at that moment.

Madox is such a calm patient kid, but this tumour is stealing him from us in every way. He never threw a tantrum and never cried for something. These past few days, he has cried and screamed and freaked out because of frustration, confusion and sometimes he just doesn’t even know why. The tumour is pressing on different parts of his brain that he can’t control his emotions and it has completely changed our boy. We still see glimpses of who Madox use to be, but pain and suffering robs one of normalcy. I would sell my own soul to trade places with him. No child should ever have to suffer this way. Trapped in your own mind, unable to move, unable to eat, unable to communicate. Truly hell on earth

Madox had fallen asleep on the couch in the afternoon. After 3 hours I tried to wake him but couldn’t. We couldn’t rouse him at all. So Marco and I readjusted him and sat by him crying, knowing this was the end. He was having apneic episodes, going 20-30 seconds without a breath. Valin came upstairs and saw us sitting by Madox crying. He asked what happened and I finally said the words to Valin “your brother is dying.” Valin instantly cried and ran to Madox. He refused to leave his side from then on. Valin even slept by Madox that night. Even though Valin doesn’t say much, you can see how much his heart is breaking watching his brother deteriorate. I hate this life we now live.

Not leaving his brothers side