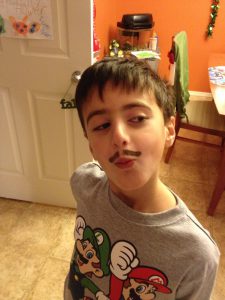 On March 7, 2014 our 8 year old son Madox was diagnosed with a rare form of brain tumour called DIPG (diffuse intrinsic pontine glioma). This tumour sits on the brain stem, intertwined within the pons. There is no cure. Our family was left devastated.

Madox grew up with his dad Marco, mom Suzanne and best friend and older brother Valin. Madox was an active, goofy, happy little guy. He was always jumping around and laughing at just about anything. He and Valin are only 14 months apart, and did everything together. Madox was so creative, filling our walls and fridge door with all his artwork he was so proud of. He loved to wrap his legs around his neck just to see people’s reactions. It was always the first thing he would show his new teacher every year. Madox was an absolute snuggle bug and would take snuggling on the couch with his parents, than sleeping over at a friend house any day. He LOVES his family, and told us everyday.

His symptoms began a week prior to the diagnosis with eye squinting, tiredness and some weakness. After seeing an optometrist, we knew something more serious neurologically was going on. We took him to the emergency department pushing for an MRI. After Madox was failing some neurological tests, like balance, they finally ordered the MRI. That’s when we received the devastating news. Taken into a private room with the doctors, we knew it was not going to be good. What we didn’t expect was to hear the words ‘terminal’ and ‘make memories while you can.’ No parent should ever have to hear those words.

On March 12, Madox suddenly lost mobility and feeling to his entire left side and we rushed him to the emergency department. Within 12 hours, he had such cerebral edema (brain swelling), that he needed to be intubated (tube placed in his throat to aide in breathing). Madox almost died a few times while in the Intensive Care Unit, but he fought hard hoping to beat this tumour. Over the next month he received his full course of radiation treatments to his brain.  We opted out of chemotherapy as it is of no help for this type of cancer. We decided to concentrate more on his quality of life and do all that we could for him. With the help of the radiation, Madox was able to be extubated (tube removed from his throat) and eventually be sent home days before his 9th birthday. Day by day Madox would get a little more strength to his left side, eventually being able to walk again. He started with a walker, then eventually began walking independently while we were at Disney World for his dream wish. We were so happy to see such changes in Madox, that we foolishly began looking forward to Halloween and maybe Christmas with him.

The first week of June, Suzanne began noticing an occasional drag of the foot or slurred speech. Madox also began complaining of a random headache. Being fearful the tumour was already growing back, mom demanded an MRI. The MRI showed that not only was the tumour already growing, but it was back to diagnosis size. The little hope the Suzio family had, was completely smashed with that MRI result.

August 8th 2014 will always be a terrible day as Madox took his last breath surrounded by his family. Madox was only 9 years old. Watching Madox fight to breathe, to stay alive, will forever be etched into our minds.  We miss him dearly and will never ever forget the happiness he gave us all.

We are so angry there is no cure, let alone any kind of treatment for our children with DIPG. We are committed to raising funds in which 100% of all net proceeds raised go toward childhood brain cancer research (specifically DIPG), hoping to help children in the future. We also support The Dream Factory here in Winnipeg. They granted Madox’s dream wish to Disneyworld in May 2014 and it was the only enjoyable time Madox had during his illness. We want to help send more children on their dream trips and grant their dream wishes.