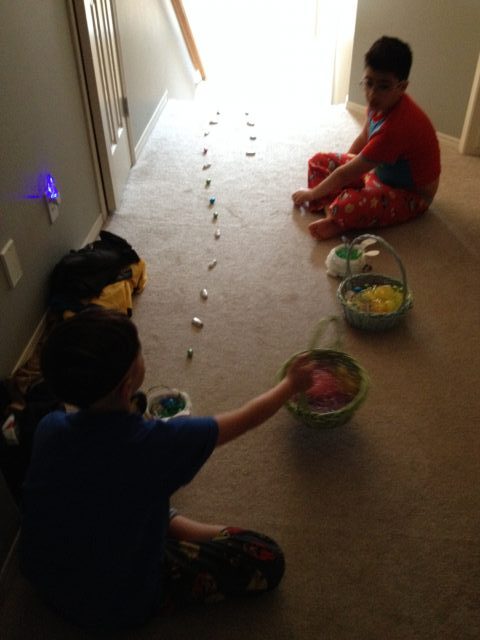 Madox’s last Easter with us, was bittersweet. He was finally feeling better after returning home from a stint in the ICU and radiation was complete. Yet a nagging feeling stayed with him knowing this would be our last Easter together. I want to share my journal entry from that day. April 20, 2014

I am so happy we can spend this holiday together. At one point when Madox was intubated, I didn’t think we would spend any more holidays together. Yet here we are, and he is smiling.

Valin really wanted to wake up with Madox Easter morning to hunt for eggs with him. So Valin and Madox slept in our bed, while Marco and I slept on the floor next to them— we can all wake up together. <3  Well guess who was the first to wake up? You guessed it, Madox! And at 5:15am to boot. He woke up energized asking if he can hunt for eggs. We said nothing till 6am so he laid back down and fell asleep until 6:30am where he proceeded to wake Valin up. Valin first ran out to the hallway and grabbed both their baskets. They both sat on the ground looking at all the items left for them by the bunny. Madox began to scooch himself to the hallway and saw the 2 rows of chocolate eggs leading down the stairs. This was a little tradition we had. Madox had told us before that this was his favourite part of hunting, was gathering his own line of eggs all the way down to the basement. So the boys each picked a line and started filling their baskets. Valin was already down the first set of stairs when Madox just made the top of the staircase. We got to the stairs and Madox was able to slowly guide himself down a step or two but needed help from me for the rest. I was so excited for him to be able to do even that! He seemed a little sad I needed to carry him down. He had mentioned he had wished to wake up on Easter able to walk. That broke my heart knowing how disappointed he was.

They started their hunt on the main floor. Madox used his walker for a few eggs, scooched for a few, and had dad carry him for a few. At one point I was filming Valin and looked down at Madox. He had gotten himself up on his hands and knees to crawl. HE WAS CRAWLING! When I said “oh Madox, I didn’t know you can do that”, he just responded “either did I”. So awesome! Then he kneeled at the breakfast table chair and pulled himself up. We were so excited we started hooting, hollering and clapping for him. You’d think he just won a marathon, which truthfully, this was harder.  He had such a big smile on his face.

We had breakfast then Madox needed a nap. His left arm and shoulder were tired as he was trying to use it more than he was use to, so we massaged it while he fell asleep. As I massaged him I would just stare at his face with tears in my eyes. My active, full of life son was depleted after a 10 minute egg hunt. Never did he ever need a nap, and now he was heavily sleeping and fatigued for crawling in the house. Life just isn’t fair nor does it make sense. I wish I could have traded places with him, to avoid him of any pain and discomfort. 🙁

Afer his nap, we got dressed to go to his Nonni’s house. Madox wanted to dress nicely for nonna, so Marco and Valin followed suit. Nonna made all of Madox’s favourite foods, and he really enjoyed himself. He managed to stay awake to watch ‘Hop’ but we needed to leave soon after as his energy was getting low. Madox had a good Easter, and we definitely loved being able to enjoy Madox on this holiday.

Today we continue the traditions we had with Madox, but it will never be the same. Valin really needed his brothers help to find some eggs. Someone to wake early with while checking out their basket full of treats. His best friend to get a tummy ache from too many chocolates. Dad needed his second son when he and Valin wrestled after breakfast. I needed my baby boy to snuggle with as we played video games after lunch. We continue on with our lives, but it will never be the same. It will never be how it was, no matter how hard we try. Our hearts are too scarred.  Happy Easter my sweet boy