Anxiety with the unknown

Life changes after watching your child die. Things are more important. Things are less important. We see things differently. Some better, some worse. But we change. Sometimes we become hyper vigilant about things we normally would brush off or deal with in a calm controlled manner. I don’t think that will every change now.

In 2018, my only living son Valin told me he had a bump on his knee. I assessed it. Told him we’ll keep an eye on it and go on with our day. A month later he mentioned casually “hey mom, that bump on my knee kinda hurts and is a bit bigger.” I reassess it, tell him casually we’ll call his doctor for an X-ray sometime this week. All the while my brain is going to explode with what it could be. My heart was racing. It looked and felt like a tumour. Valin was concerned and asked if it was cancer. I was honest and said I didn’t know but we’ll see his doctor soon to find out. Breaks my heart that cancer is the first thing we all think of when something is out of the norm in our bodies.

His pediatrician saw him 2 days later. MRI ordered and eventually done. Orthopedic surgeon consulted. Within a few months we saw the surgeon, discussed the sudden growth and the new onset of discomfort. With our family history, and I am sure the doctor sensed parental stress, they scheduled Valin’s surgery for removal a month later. Valin wasn’t happy but knew why it was important to remove the tumour sooner than later. When the surgery was completed, the surgeon walked out to show us a photo of the tumour he removed. He was 99% sure it was a benign tumour. BENIGN. Best words we could have heard. This photo is of the SOB that invaded my sons body. Gone, with pieces of bone for good measure. The biopsy reports also confirmed it was a benign tumour. Our bodies could finally relax and we can breathe a sigh of relief. Wish we could have removed Madox’s DIPG from him and celebrating it was gone forever too. 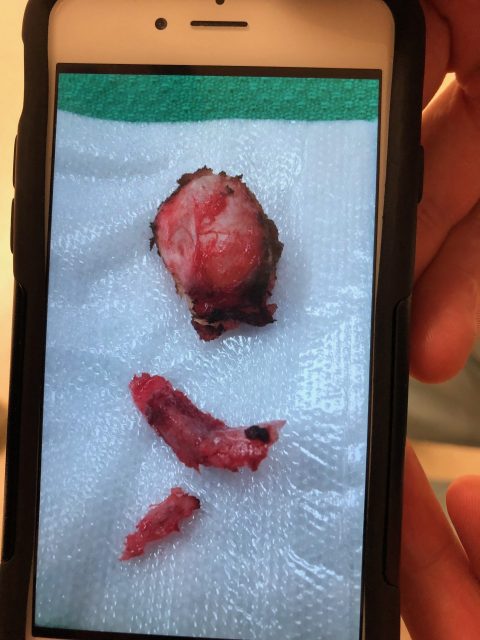 DIPG changed us. The few weeks before surgery was torturous on us, just thinking about what was in our son. Soon after the surgery we were able to turn our focus on Valin and his recovery. One doesn’t realize how tense and involved your entire body becomes when your mind is so focused on one thing. I was exhausted leading up to the surgery. I know it was my own doing with my constant worry, but that’s what cancer does. It will always be in the back of our minds. Always be the first worry we think of when something is out of place, wrong or different. I hate DIPG. I hate cancer.