Halloween has always been my favourite holiday. Dressing up, being silly, decorating the house and yard, and all the treats. What I loved the most, was walking around with my boys and watching them run up to each house screaming “trick or treat!” The excitement in their eyes, the giggles as they raced each other to the next house, and the enjoyment I felt for them. When they were young, we only went to a few neighbours houses. Then it expanded to the entire street, then out for an hour. It didn’t matter how cold it was, it was hard not to smile with their love of the evening. Marco and I equally loved joining the boys so we would take turns yearly. Madox’s last halloween was 2013, and Marco was the lucky one to enjoy it with his boys. If I knew Madox would be diagnosed with brain cancer 5 months later, I would have joined them instead of handing out candy. I hate the what ifs.

The night before halloween, we would always enjoy each other with a cartoon movie (probably a Scooby Doo halloween movie) and snack on the halloween cookies we decorated together earlier in the week. We would set out their costumes and talk about the route we plan to take. It was fun for big and small kids alike. The excitement is not there anymore. I helped decorate the house this year; the first year since Madox passed away. Valin asks and I pull out the tote, but he did most of it last year. I tried to get a bit more festive for Valin this year, so I helped decorate and bought some more smaller items too. I even hosted his friends to a halloween sleep over party. We all decorated cookies, ate lots of sugar treats, and watched a spooky movie. My heart was happy and yet so sad at the same time. I wondered if Madox would have asked for his own sleepover party? If he would have wanted to hang out with Valin’s friends or if he would have rather snuggled upstairs with us watching our own movie. Sigh

This year, our third halloween without Madox has not felt easier to accept. I doubt I will ever accept this. Some days are tolerable and I can live life with a small smile. There are days that are a struggle, battling myself in my own mind. Forcing myself to get up out of bed to go to work is harder some days. Many days I wake with such sorrow that I just can’t face the day. Taking a mental day might be good for me, but I worry it would take me into a spiral down into the darkness. So I go, but the smiles are few. I have been waking in the middle of the night. It hasn’t really gone away. The first thought that always comes to me is when Madox was hurting in his last stage of life. I can’t sleep after that memory has flooded through my core. I sob as silently as possible so I don’t wake Marco. Most nights I don’t sleep through the night, and I know Marco is the same.

Yesterday, the day before halloween, we three went to “visit” Madox at his plot. Visit. Ha! That’s a laugh. Marco carved a Pokemon pumpkin for Madox this year. What would he have wanted to carve this year? We are pretty confident it would have been Pokemon, but which one? We will forever wonder about things like this, which truly hurts. Marco decided on Gengar; Valin and I agreed that was a great choice. 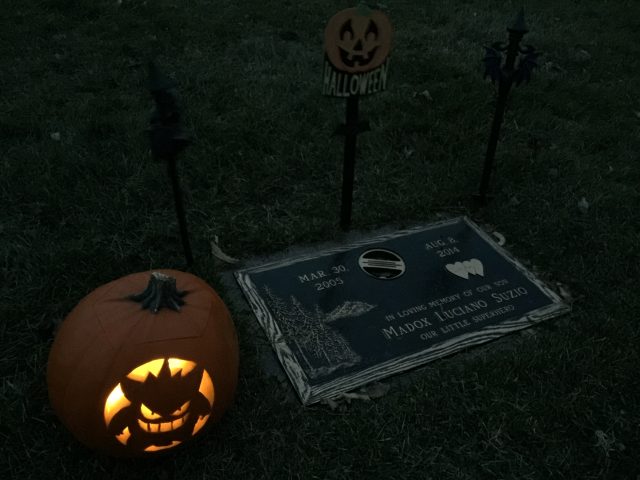 The last pumpkin Madox carved was Pikachu- with my help. I miss sitting with him, picking out a stencil, and laughing at how grossed out he and Valin would get with removing the innards of the pumpkin. Instead of laughter and happiness, we are crying and saddened at another holiday missed. A longing of what use to be, what should be. Hard to be at a cemetery on a cold Hallow’s Eve night rather than cozy, snuggled up on the couch with my boys.
My heart remains heavy.