We are honoured that Euro-Can Enterprises chose Madox’s Warriors as the charity to sponsor at this years’ tournament.

Players had to putt 3 balls toward a bullseye to determine how many tickets they receive for a raffle draw. Todays prize was 2 tickets to a Winnipeg Jets game (super sweet seats) and $100 spending money (running joke was they could buy 3 beers with that $100 LOL). Those tickets were donated by Mark and Vanessa Laarveld.

There were a lot of laughs, a lot of terrible shots (alcohol was clearly involved) and 4 hole-in-ones! We raised $790 this afternoon. More money that will help children with brain cancer, and being able to bring awareness to a new group of people. Thank you Mark Laarveld for thinking of us for your tournament. 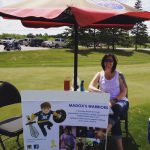 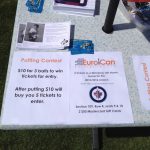 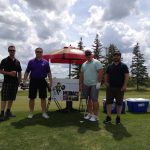