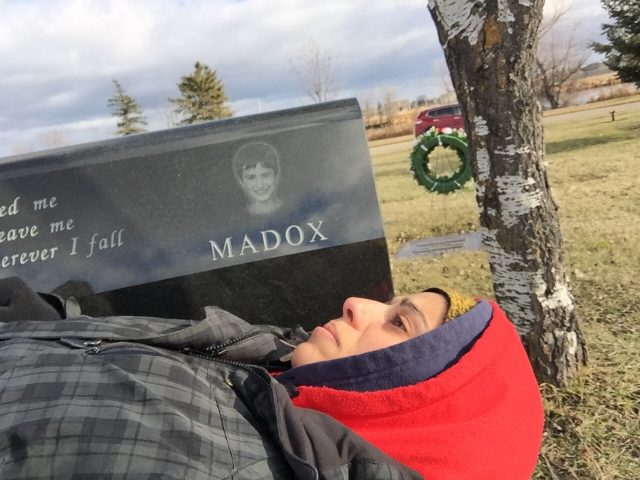 Life has been more of a struggle lately. I don’t know what triggers it, but I feel I have been more angry, more depressed, more empty. Many people think it should get easier the longer a loved one is gone, but I don’t sense that. Certain dates still rock me to the core. I constantly think of what could have been, what should have been. When dealing with child loss, it is impossible NOT to think that way. Children grow, change, develop into their own selves. I loved watching how different Madox was from Valin. How they each loved different sports; loved different toys; yet loved being with each other. So I dwell on what I envision Madox would look like; how he would style his hair; what types of clothing he would prefer. Sadly, those thoughts just pop in my mind at the oddest times. It’s just hard to shake it once it grabs my attention.

Marco and I both turned 40 this year, which should be a big deal. I remember at 35 talking to the boys about going on a nice trip to celebrate mommy and daddy’s birthdays. Madox was so into it. He kept throwing out places, naturally Disney World was first on his list. The boys and I settled on Hawaii because Italy would be too expensive and we would want at least one month to enjoy it (which neither of us had). Madox would remind us at our next birthday how we were going to have a big trip on our 40th. He was very excited. Little did we know he would not make either of our milestone birthdays. This is what made this years birthday even harder. Marco is a wonderful husband. He knows when I just need alone time and he never questions it. My birthday landed on a Saturday, so we were all home. While Valin had his piano lesson, I went to “be” with Madox at his graveside. Marco didn’t ask if he could join me. I think he knew I needed to be alone. I laid on his bench listening to songs that reminded me of Madox, or related to my aching heart. I just stayed there looking at the sky, asking for forgiveness for not protecting him like a mom was suppose to. Not being the best I could have been while he was alive. For not being able to take his place so he can live to be 40. It was a cold day but I stayed there for almost an hour.  I don’t like taking selfies or share my raw photos like this, but I feel this is an important one to share.

How I started off my 40th birthday

Christmas and New Years was fast approaching after that day. Valin and Marco ignored my protests of pushing the decorations till late December, and they started to put up the tree together. I helped but the love for it continues to faulter. I still feel I am only going through the motions for the people I love, the people around me. Valin was so happy to have the house festive again. Marco loved it too, but I sensed his heartache completing it without his little boy. Every year one of the boys would sit atop Marco’s shoulders to place the angel on top of the tree. Even with the boys getting bigger and taller, Marco continued the tradition as long as he could. 2013 just happened to be Madox’s year, and his last. I remember taking photo after photo of Madox up on Marco’s shoulders, giggling and almost falling backwards. He had grabbed hold of Marco’s front shirt and was falling with it. Valin and I were laughing at what the photo looked like: Madox hanging halfway down Marco’s back holding onto dad’s neck and shirt, and Marco’s front is half exposed. Those memories I will always keep close to my heart. They make me smile but also sad that we no longer can create new laughs and traditions. Christmas we no longer run around to other family’s homes. We wake up, open gifts, and spend the rest of the day together. By lunch time we go to Madox’s plot and bring some chocolate that was in his stocking (yes we still put a few items in Madox’s stocking) and a cinnamon bun that we use to traditionally make together on Christmas eve to enjoy Christmas morning. Readied with shovels, all three of us begin building Madox’s fort. The snow was not good for fort building so we did as much as we could. We all laid in the snow surrounding his headstone and was all quietly reflected. I was the first to get up off the snow and slowly moved to the car. I was sobbing how I hate this new tradition. I know Valin likes coming to build a fort for his brother but you also know how much he hates it. Hard to enjoy something you use to love doing with your brother. I so wish it was different.

New Year Eve and New Year day  we spent skating at a nearby park. We use to love going all together, skating around and around as a family. Marco and the boys would play Bulldog at one section of the ice while I watched and laughed. Then they would turn and attack me and we would all end up in the nearby snowbank laughing. Now I skate behind only two bodies and watch only two boys wrestling and playing tag on the ice. I try to live whatever life I have, trying to honour Madox as best I could. Some days are very hard. But for now, I will savour what memories I have. Goodbye 2016 and good luck 2017.