Our Hearts Ripped Out

When Madox was ill, we created a Facebook page called Strength For Madox. It was to allow friends to be up to date with Madox and our lives. I don’t post on that page anymore, as it had gotten too difficult for me emotionally. I poured my heart out on that page, hoping it would shed some light into a life with cancer. I was hoping it helped other families going through our pain. I’m not too sure if it did, but it helped me get my emotions off my chest. I used it like a diary, not caring how personal it was.

There was one post I remember that flowed off my fingertips. It was about the day Madox was diagnosed. I cried and cried as I typed, but I kept going as if afraid I would forget those memories, those emotions. I know now that will never happen. I still have nightmares about that day, about those words, about our heartbreak. Nothing will ever make me forget the first day we died.  Today will be 2 years since diagnosis day. I decided to share that original post from 2015, altered slightly.

Two years.
Two years ago today we got a diagnosis.
Two years ago today they told us you have a brain tumour.
Two years ago today you died for the first time in my heart.
It is still so clear in my mind, like it was yesterday. We woke up with you complaining of “a little headache.” You never complained, and when you did, you always down played it. To me, even a little headache, was a new symptom that I refused to ignore. After sending Valin off to school, we got ready for ER. You weren’t happy. I had promised you the night before we would have a fun day together, just us two. You had the day all planned. We would wake up, play some board games, go to subway for lunch, then mini golfing at your favourite place (U-Putts). Now I broke my promise and we were heading to the ER. “When they tell us that you are okay, we will still do all of that.” I said to him looking through the rear view mirror. “Fine” he responded with arms crossed.
We got in pretty quickly— bonus for knowing the nurses working that day. Nurse A even gave us the “observation” room as it was one of the more comfortable rooms that had more privacy and a television. I was so thankful for that. As we sat there, I just kept repeating to each resident “I just want an MRI.” We saw about 3 residents and one student. With each one that came in the room, they each performed the same neurological tests with the same results. “When is the neurologist going to get in here? I can see her out the door. She will get a better report from me than second hand from you. Just send her in!” I was getting snippy with everyone that came in the room. I was losing my patience.

It was now noon and Madox was more annoyed and angry. I guess he convinced himself he was going to be freed by lunchtime. I kept apologizing but started explaining why I was worried. “Sweetie, notice how it’s hard for you to stand on one foot? Your balance is off so we need to take pictures of your brain to make sure everything is okay.” “But it’s probably just because I’m tired.”  I only wish it was just that. The neurologist came in (thankfully one that I have always respected and trusted) and performed all the typical tests, and so many more. As I watched I would rate each test in my head. The curse of being a pediatric nurse. He kept failing each one. My baby was failing his neuro tests.

The doctor agreed with me regarding the MRI and ordered it. I was texting Marco every 10 minutes it seemed about what was going on. He kept asking if he needed to be there. I didn’t want to admit that he did so I kept saying not yet. After watching the detailed neuro exam, I texted him and said yes come. He was in the ER with us within 40 minutes. We all sat there waiting for the MRI, watching tv or on Madox’s DS. So many things running through my head. My heart was pounding just thinking about everything that could be wrong.

Finally at 5pm we started walking to the MRI room. Madox was looking pale and tired, but walking fine. I was very worried. The technicians said ” we will do the 20 min MRI without contrast. The only time we do contrast is if we see something or if we are concerned about something.” As I stood inside the room rubbing Madox’s leg and staying in his mirror view, I would keep saying to myself over and over “be nothing, be nothing.” After the 20 min mark the technician walked in with her gaze down at the ground. “The doctor ordered contrast.” Tears instantly welled up in my eyes “they found something?” She didn’t look at me “they just ordered contrast.” For the remainder of the MRI I continued to rub Madox’s leg but cried the entire time.Thankfully he didn’t have a great view of me. I managed to keep smiling because I know he could see my big smile. “You’re doing great buddy. Just keep still” I would say to him throughout the test.

After he was done, he literally jumped off the table and started stretching “ahhhh that’s better” with his typical smile. HOW can he be sick? He’s acting the same as always, my same Madox! Back in our room, we waited for the doctor to review the results. It didn’t’ take long. They asked to speak to us in another room. A volunteer sat with Madox so we could talk “privately.” I knew once they said that, it was bad. VERY BAD! We walked through the ER to a back quiet room. My heart was in my throat during that long, terrible, mind numbing walk.

Today will always bear terrible memories for me, for all of us. Valin was picked up from a neighbour after school, so we could both be with Madox. Marco eventually went to get Valin at 7pm and had to tell him the reason why he had to sleep at grandma’s house for a few days. Why me and Madox were at the hospital. That conversation must have been so hard for Marco to have with Valin. So hard for a little boy to listen to and try to grasp. How can that make sense to him when he and Madox were wrestling the day before? 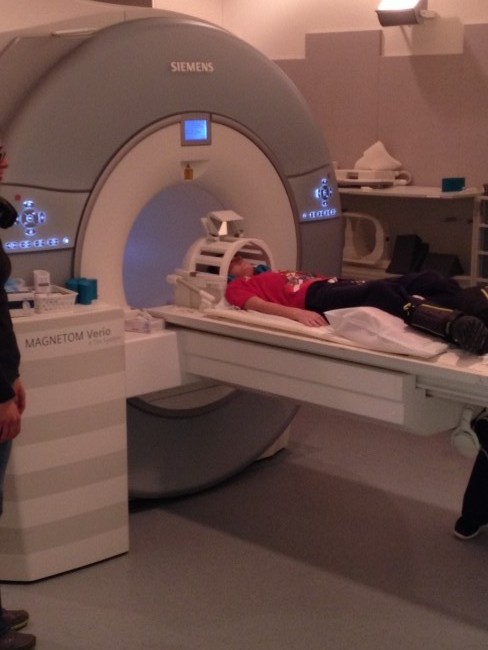